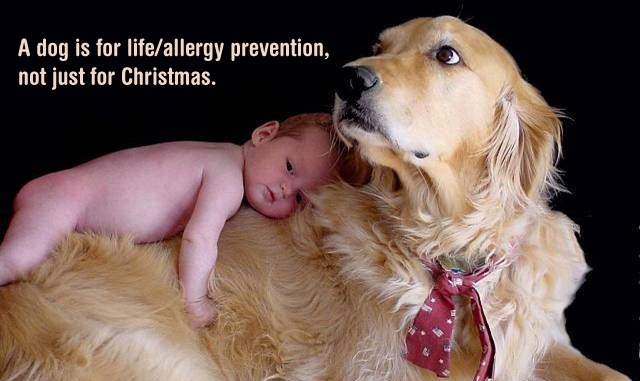 Of course the concept that early exposure to environmentally challenging agents will reduce risk of allergy is not a new concept, nor is outside of general knowledge, in terms of the hygiene theory. However, each subsequent supportive study continues to support the notion that we can programme our immune system at an early age (but not exclusively) to protect us from overly enthusiastic immune responses later in life.

The desire to own a pet, in this case a cat or dog is normally driven by a variety of societally determined decisions, but this paper suggests that rather than the better known statement ‘A dog/cat  is for life not Christmas’, we might be able to say: A dog/cat is for allergy prevention not just Christmas. [1]

The paper published in July 2011 Clinical and Experimental Allergy, found that when following 600 children until the age of 18 found children raised in homes with cats during their first year of life have about half the relative risk of developing allergies to these animals in adulthood.

We also know that children born by caesarean will tend to trend towards a higher allergenic risk, but the researchers also found that boys and girls delivered by caesarean section also showed significant reduction in risk for sensitisation to dog allergy if they had a dog during their first year (RR 0.33, 95% CI 0.07 to 0.97).

Exposure to common allergens, including airborne, food and animal consistently appear to generate immunological benefit for a lifetime of exposures, and extend their tolerance benefits beyond the selected triggers, suggesting we are best served by experiencing a wide range of triggers in appropriate doses and settings from a very early age.