Gut Flora, Probiotics and Vitamins A+D – Do they influence Allergy and Autoimmunity.

The fields of immunology, microbiology, nutrition, epigenetics and metabolism are rapidly converging utilising a systems biology methodology to explain our intimate relationships with our microbial cohabitants. For over 30 years data has been building to scientifically support the hypothesis that intestinal cohabitants operate in a collective manner with macro and micro food intakes to shape and define our immune systems from an early age. The result is a collective impact bound by mutual cooperation that may have unintended consequences including a wide range of pathologies.

Strachan[1] proposed that an aspect of this could be attributed to the hygiene hypothesis and this model has been extensively developed by Rook and colleagues[2] over the years to suggest that a lack of suitable old established antigenic triggers are missing from today’s population. In part this is due to altered lifestyle and in part due to altered food selection. The result, rather than a skewing to single effector T cell phenotypes initially seen as mutually inhibitive TH1 or TH2 phenotypes are too modest in their explanations. These days the role of TH17 cells and Treg cells add additional information to explain many of the immune paradoxes that previously did not fit the hygiene hypothesis but are by no means the full explanation.

In addition, the sophisticated mining of the gut microbiome has indicated that the combined interaction between the gene expression of the bacteria that populate our gut and the genes of our cells also interact and may be adversely activated by pro inflammatory events leading to progressive developing immune mediated diseases including most of the common western world complaints. This complex gene to gene interaction is already revealing impressive interactions in that in animal models there is clear indication that it has striking effects on brain function and behaviour including serotonin and dopamine production as well as synapse function.[3]

Our bacteria are vital partners in the development of immune tolerance including arguably the most important – oral tolerance – via their induction of Treg cells in the gastrointestinal tract and their subsequent migration to other more central tissues, a process known as bystander suppression.[4] The result is that bacteria in the gut may fill the role of immune sensor for immune tolerance in other distant wet tissues such as the lung.[5]

This relationship, whilst identified is a far more complicated an area for study than most due to the high number of variables in human behaviour, food selection, medication use, genetics and cell diversity. A few key areas, in particular maternal and foetal diet, prebiotics, and probiotics deserve some greater attention along with Vitamin D and A. Food also serves as an important substrate for bacteria, digesting plant polysaccharides and then producing very important short chain fatty acids and other nutrients for the bacteria, amplifying their influence immunologically.[6]

There remains a high degree of uncertainty in this model as the specific bacteria needed to achieve immunologically desired effects are still not fully understood, indeed it is unlikely that in a human model’ a single strain or even a modest strain mix will be enough. We are however, already aware that massive bacterial transplantation as in healthy human faecal transfers confer impressive immune restoration in the face of C. Diff infections no longer responsive to antibiotic therapy.[7] The possibility that similar bacterial transfers in patients with autoimmune diseases with established relationships to altered mucosal immunity is already being discussed.

Studies using more traditional methods of bacterial analysis have frequently confirmed that there are variations in the compositions in the gastrointestinal bacteria of allergic individuals and support the idea that failure to maintain tolerance may account for future risk of atopy and autoimmune diseases.[8] A recent review of 17 studies found that 14 of them supported the notion that gut bacteria influences the risk for development of allergic disease.[9]

The addition of essential nutrients and other co factors also seem to be a significant component of any proposed therapy and bacterial re-colonisation in the aim of inducing immunological tolerance. Vitamin D deficiency has been linked to the developing burden of allergic and autoimmune disease especially in relation to the last 50 years or so.[10]

The active metabolite of vitamin D (1,25(OH)2 vitamin D3) is required by the dendritic cells, our professional antigen presenting cells found in abundance in the gastric mucosa to modulate the signalling messages between gastro intestinal bacterial antigens and Tregs and regulatory dendritic cells (DCregs). It is proposed that Vit D is required to provide appropriate migrating signals to ensure that Tregs arrive at the sites of inflammation. [11]

Vitamin D also manipulates the key cytokines IL-10 and TGFβ to induce tolerisation. When vitamin D is deficient and gut bacterial complexity is reduced, bacterial translocation across the mucosal barrier increases leading to dysbiotic induced inflammation and loss of tolerance. Vitamin D may also be required by direct mechanisms found on the surfaces of bacterial species to maintain, increase or decrease bacterial complexity. The recently proposed levels of Vitamin D supplementation to manage bone health from the Institute of Medicine[12] may well prove to be wholly inadequate for this level of function to be maintained.

Retinoic acid is also implicated in the regulation of immune homeostasis via the peripheral induction of regulatory T cells especially in the gut that mimic the Treg (FoxP3) cells induced thymically and which then exert a local and systemic effect that induces tolerance. Retinoic acid also inhibits production of T helper type 17 (Th17 who produce the neurotoxic IL-17 cytokine) cells induced by IL-6 and TGF-β.[13]

The result is that immunological defects may also underlie dys-regulated responses to mucosal pathogens when vitamin A stores are low, and vitamin A deficiency is the most common nutrient deficiency in the world.[14]

Vitamin A can be obtained “preformed” from certain foods such as dairy products, liver and eggs. But another key source is beta-carotene, the orange pigment in carrots, which is converted into the vitamin in the body.

In 1988, an American study found that excessive use of vitamin A during pregnancy was associated with certain birth defects.[15] Beta-carotene, however, was deemed to be safe and this led to the general advice that we should eat more of this nutrient, allowing the body to convert what it needs into vitamin A.

Recently a group from Newcastle UK have identified a common gene variant that greatly lessens the body’s ability to convert beta-carotene into vitamin A.[16] Their work revealed that a significant number of individuals are “low-responders” unable to absorb and/or convert provitamin A carotenoids to vitamin A, and that even in individuals who would normally be able to metabolise provitamin A to vitamin A, numerous other common factors can effectively impede this conversion.[17] These include; dysbiosis, alcohol, poor bile acid production, insulin resistance, HCl deficiency, bacterial infection, coeliac disease and others.  Even without the additional factors the researchers estimate that as many as 40% of the European population may have difficulty in converting vitamin A due to the gene variants.

Vitamins A and D are notably distinct from other vitamins in that their respective bioactive metabolites, retinoic acid and 1,25-dihydroxyvitamin D3 (1,25(OH)2D3), have hormone-like properties . More than 532 genes are recognised as either directly or indirectly regulated by retinoic acid and over 220 by vitamin D.[18],[19]

Retinoic acid and 1,25(OH)2D3 compete for the same nuclear receptor partners; both the Retinoic Acid Receptor (RAR) and the Vitamin D Receptor (VDR) must form heterodimers with retinoic X receptors α, β, and γ (RXRs) to be able to bind to response elements and initiate transcription.[20] For this reason, 1,25(OH)2D3 and retinoic acid naturally moderate each other’s uncontrolled effects.[21] Balanced supplementation or food selection of these nutrients is required for bone health as well as immune tolerance and represents safe supplementation strategies once individual nutrient deficiencies have been corrected.

Vitamin A, specifically the active metabolite all-trans retinoic acid, decrease effector T-cell function, while also increasing regulatory T-cell populations and activities. One might predict that insufficiency of either vitamin D or vitamin A could predispose to hypersensitivity or autoimmunity and predispose to immune mediated pathologies.

A recent paper shows that Vitamin D deficiency increases asthma severity supporting previous papers that found a similar link and also describe how it enhances the activity of corticosteroids.[22] A synergy between these nutrients and zinc as well as fibre has been explored in another review, which cautiously supports the notion that this approach will confer a preventative benefit to patients with asthma.[23]

In the intestine, an inappropriate balance between inflammatory and suppressive immunity can compromise mucosal immunological homeostasis and destroy the integrity of the mucosal barrier. The immune transcription factor FOXP3+ Tregs, induced by RA, play a key role in maintaining the steady-state of tolerance towards innocuous antigens, thus preventing excessive, self-destructive immune responses and the development of inflammatory bowel disease, autoimmunity and allergy.

The apparent serendipitous arrival of a key immune modulating nutrient from the very food sources it is helping us to remain tolerant towards is one of life’s great synergies.[24]

From a clinical perspective resolving vitamin D deficiency has much to be supportive of, however, the ingestion of Vitamin D in large amounts may well pose an immunological regulatory problem in patients who have inadequate conversion of beta carotene into retinoic acid and or a diet low in vitamin A. The result of a long term campaign to caution against the oral use of retinoids as a supplement together with dietary deficiencies due to reduced consumption of organ meats has resulted in a large part of the UK and US population demonstrating Vit A deficiency.[25], [26]

The recent surge in enthusiasm, and with good reason, for the supplemental intake of vitamin D may mean that many are missing the benefits of synergistic immune outcomes between Vitamin A and D and may in fact be driving the immune state towards a pro-inflammatory event despite best intentions.[27] 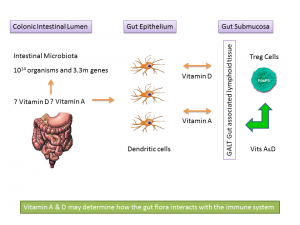 The mapping of the microbiome is a very complex task, especially the identification of individually relevant strains. If this task can be accomplished, then it is conceivable that in the not-too-distant future we will prevent asthma, food allergies, atopic dermatitis, allergic rhinitis, and other autoimmune diseases, such as Crohn’s disease, type 1 diabetes mellitus, and multiple sclerosis. Using a cocktail of anaerobic bacterial antigens, dietary constituents, or the bacteria themselves (prebiotics and probiotics) in combination with vitamin D and A as well as other essential micro and macro nutrients administered orally to both pregnant women and their offspring as well as mitigating these conditions in the older more established population.

[20] Mucida D, Park Y, Cheroutre H. From the diet to the nucleus: vitamin A and TGF-beta join efforts at the mucosal interface of the intestine. Semin Immunol. 2009 Feb;21(1):14-21 View Abstract

One Response to “Gut Flora, Probiotics and Vitamins A+D – Do they influence Allergy and Autoimmunity.”